The Director, Writer, and Creator

The young visionary behind ZĒP (pronounced Zeep) and everything within, Nolan Cross is currently eighteen years old with a degree of fluent wackiness and unwavering ambition. Cross’ main fascination lies in movies, and unhinged epic storytelling. Since childhood, he’s adored the art of cinema, and his primary aspiration is to be a moviemaker extradonairè and bring his creation of ZĒP to life in a grand live-action miniseries, or feature film. Along with some of the great literature he’s read, Nolan has internalized every film he’s seen and takes them in as fuel for his own creative projects. When not working on the Project ZĒP itself, he spends his time watching, experiencing, and critiquing every kind of film out there. His heroes include David Lynch, Lars von Trier, Alejandro Jodorowsky, Ari Aster, Rob Eggers, Peter Jackson, and Hideo Kojima.

Some of his favourite films are The House that Jack Built (2018), The Holy Mountain (1973), and The Lord of The Rings Trilogy, and his favourite work of literature would be The Divine Comedy. Some of ZĒP’s primary influences in fiction are Lord of The Rings crossed with Twin Peaks, with a dash of Resident Evil VIII: Village’s crazed gothic horror world, the depraved symbolism of Salo: Or The 120 Days of Sodom (1975), and all the themes of The Dark Crystal (1982).

The story and World of ZĒP have remained a constant almost throughout his entire life. ‘Passion project’ would be a criminally huge understatement.

The Designer and Illustrator

Benji aka Lowclass Art is a recognized graphic designer and illustrator, specializing in a wide variety of drawing styles and design techniques. The ZĒP Project is his first swing at a graphic novel. Working alongside writer/creator Nolan Cross, Benji has developed a new style of ink and grayscale (with striking, vibrant spot colour!) to breathe detailed life to the World of Zēp. His visual technology for the Volumes includes his high-tech iPad, equipped with an Apple Pencil, where he uses several graphic design apps to best illustrate ZĒP.

Benji’s inspirations include anything hand-drawn and old school such as vintage comic books, magazine ads, retro sci fi book covers, surf, skate, and pre 2000’s album art. With ZĒP, the art of Alan Lee, John Howe, Hieronymus Bosch and Zdzisław Beksiński has been a huge inspiration on how to portray the unstable new world Nolan has created – as well as dozens of films and video games from all genres that compliment our distinct imaginative atmosphere! 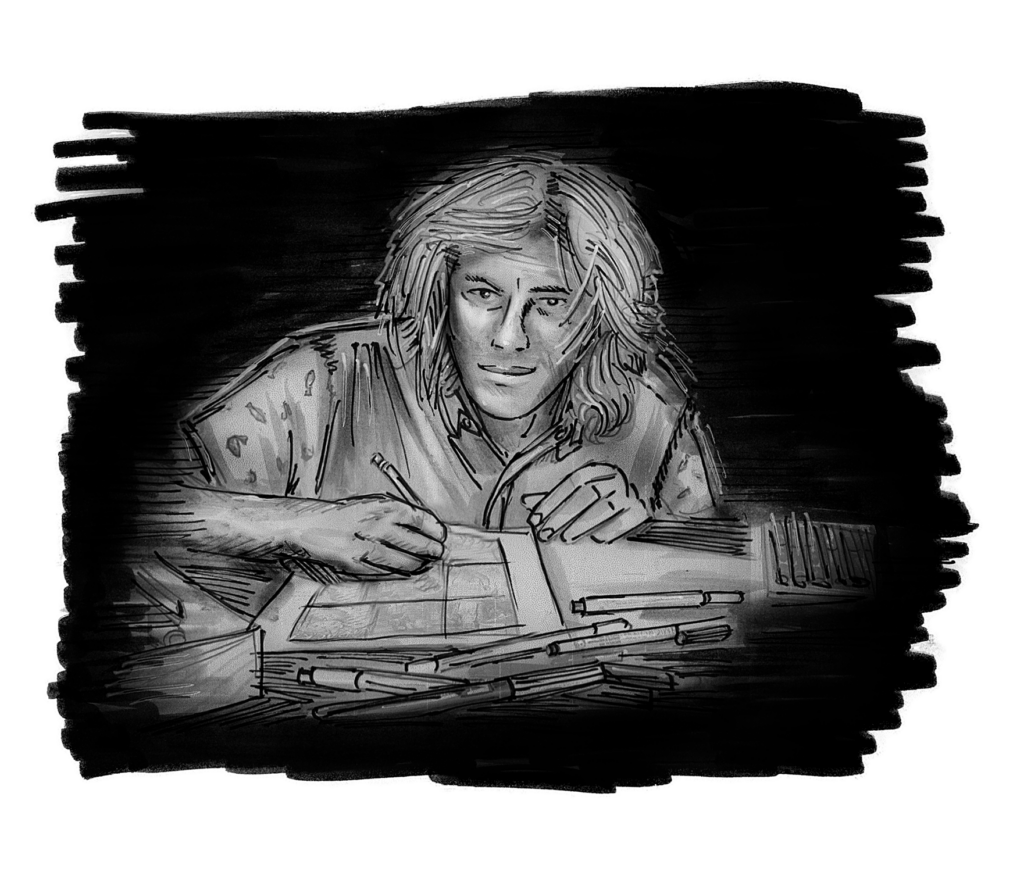